I received a question from someone implementing Exchange 2010 who was surprised to see Exchange taking up all available memory. This is because in Exchange 2010 (2007 as well) memory allocation is dynamic, contrary to Exchange 2003 and earlier versions where, depending on the situation, you had to fiddle around with boot.ini switches like /3GB to make memory available to Exchange. Also, the maximum database cache size was limited in Exchange 2003 to around 1.2 GB due to virtual address space limitations (see MSKB 815372).

Since Exchange 2003, the log checkpoint depth target is 20 MB databases. As of Exchange 2007, for configurations existing of 2+ database copies, the depth target is 100 MB for active copies and 5 MB for passive copies. This means, after 100 MB of transactions changes will be physically flushed to the database. The more changes are delayed (i.e. stored in-memory and in transaction logs), the chance of overlapping changes or combined writes increases lessening I/O’s required. Note that to lessen the time to fail-over, passive copies have a lower depth target making them commit changes more often, minimizing the log files to replay after a fail-over.

Back to the topic, Database Cache. Exchange uses by default certain mailbox database cache sizes for certain amounts of memory. The table below contains these values for systems holding the mailbox server role as well as servers holding multiple roles (source):

Now what if you have a real uncontrollable urge to limit Exchange in its attempt to optimize its database cache and you want to restrict its growth?  You can do this by changing the following Active Directory property (per store) using ADSIEDIT.msc (or using another tool or scripting language of your liking) as follows: 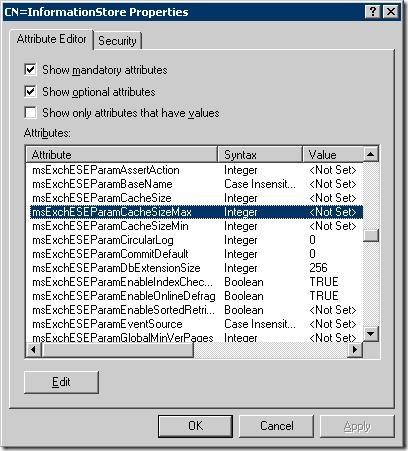 Note that lowering these values may degrade performance, in terms of server performance as well as in terms of end-user experience. However, smaller organizations with a limited number of mailbox users may benefit because they don’t let Exchange claim significant amounts of memory which it will never use.