Many of us have been setting up and testing SP1 Beta in (I hope) lab environments. One of the nice additions to the setup process people reported is the option Automatically install Windows Server roles and features required for Exchange Server, shown during the Installation Type selection. Be advised that this option is – as stated – limited to Windows Server roles and underlying features only. You still need to install other possible prerequisites first, such as the 2007 Office System Converter. Also, the option doesn’t seem to work 100% in SP1 Beta, as I had to manually add IIS features like IIS7 Basic Authentication and IIS7 Windows Authentication. 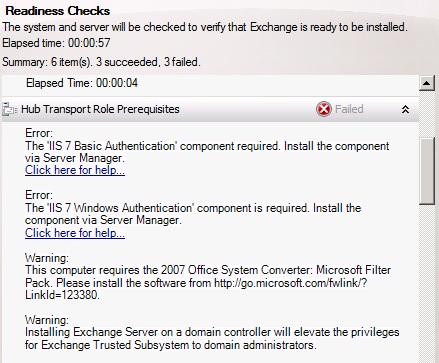 Although this potentially saves us executing the well-known Add-WindowsFeauture cmdlets (2008 R2 or ServerManagerCmd in 2008 SP2, see this article), I hope Microsoft includes automatic installation of the additional prerequisite components in SP1 RTM as well. I expect it would be little trouble to include these components as well, accelerating the process of installing Exchange 2010 SP1 and rendering prerequisite installation scripts like this script from Pat Richard obsolete.

Note that Exchange 2010 setup also supports resuming. Nice when setup discovers a pending restart; resuming means you can reboot, start setup again and continue where you left off; no need to enter all the information again. More information on resuming setup and watermarks here.