Mid-2017, I  had a look at the publicly available statistics on MVP’s around the world after Microsoft changed their MVP award renewal regime. This was to check if there was any impact noticeable. With the regime change, also came a change that MVP’s can be awarded on a monthly basis. This means people can be awarded every month; maybe not in every category, but overall yes.

Overall, the numbers are up in most categories. However, as stated before, a big sanitation round is expected for Q3’2018, as this year the former October and January awardees will be up for the new yearly renewal cycle, which takes place mid-2018. The new category introduced last year, Artificial Intelligence, saw a significant number of folks being added.

When zooming in on the Office Servers and Services MVP’s category, the awards per country is shown in the following heath map and table. Note that anonymous MVP’s are not taken into account: 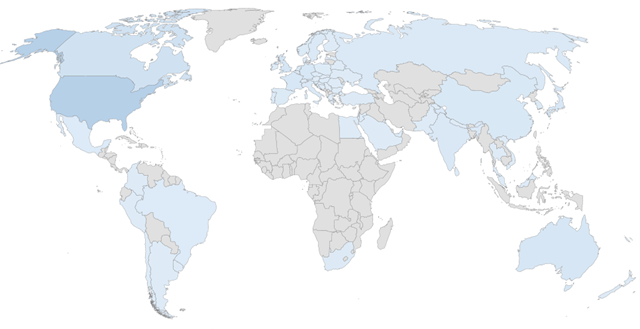 When looking at the changes over the last year (January 2017 – January 2018), the total number went down from 505 to 480 (-5%). As the Office Servers and Services category contains quite a few long-standing, former October or January MVP awardees, I’m keeping my fingers crossed for this year’s renewal cycle.

1 thought on “MVP’s around the world”