In an earlier article I elaborated on Exchange 2010’s Active Manager, what role it plays in the Database Availability Groups concept and how this role is played. In this article I want to discuss the Datacenter Activation Coordination (DAC) mode, what it is, when to use it and when not.

To understand the requirement for Datacenter Activation Coordination, imagine an organization running Exchange 2010. For the purpose of high availability and resilience they have implemented a DAG running on four Mailbox Servers, stretched over 2 sites running in separate data centers, as depicted in the following diagram:

Types of Failure
Before digging into Datacenter Coordination Mode, I first want to name certain types of failures. This is important, because DAC’s goal is to address situations caused by a certain type of failure. You should distinguish between the following types of failure:

What you need to remember of this list is that each type of failure is different, from the level of impact to the actions required for recovery.

Quorum
With an odd number of DAG members, the Node Majority Set (NMS) model is used, which means a number of (n/2)+1 voters (DAG members) is required to obtain quorum, rounded downward when it’s not a whole number. Obtaining quorum is important because that determines which Active Manager gets promoted to PAM and the PAM can give the green light to activate databases.

With an even number of DAG members, the Node and File Share Majority Set (NMS+FSW) model is used. This means an additional voter is introduced in the form of a File Share Witness (FSW) located on a so called Witness Server. This File Share Witness is used for quorum arbitration. Regarding the location of this File Share Witness, best practice is to put it on a Hub Transport server in the same site as the primary mailbox servers. When combining roles, e.g. Mailbox + Hub Transport, put the FSW on another (preferably e-mail related) server.

So, given this information and knowing how quorum is obtained, we can construct the following table regarding quorum voting. As we can see, when using 4 nodes as in our example scenario, we require a File Share Witness and a minimum of 3 voters to obtain quorum.

Site Resilience
Consider our example with the primary datacenter failing. Damage is substantial and recovery takes a significant amount of time and you decide to fall back on the secondary datacenter (site resilience). That would at least require reconfiguring the DAG, because the remaining DAG members can’t obtain quorum on their own since they form a minority. 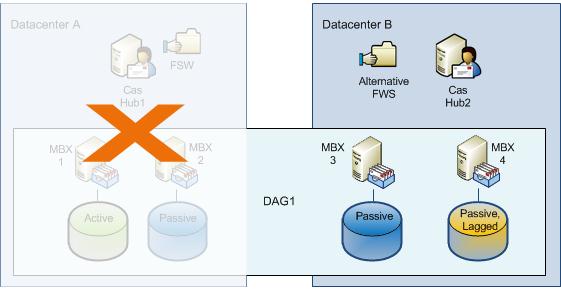 So you remove the failed primary datacenter components from the DAG, force quorum for the secondary datacenter and reconfigure cluster mode or Witness Server (depending on the number of remaining DAG members). After reconfiguring, the remaining DAG members can obtain quorum because they can now form a majority. And, because the DAG members in de secondary datacenter can obtain quorum, the Active Manager on the quorum owner becomes Primary Active Manager and the process of best copy selection, attempt copy last logs and activation starts.

Split Brain Syndrome
Consider your secondary datacenter is up and running and you start recovering the primary datacenter. You recover the server hosting the File Share Witness and both servers; network connection is still down. A problem may arise, because the two recovered servers together with the File Share Witness form a majority according to their knowledge. So, because they have quorum they are free to mount databases resulting in divergence from the secondary datacenter, the current state.

In order to achieve this, a protocol was devised called Datacenter Activation Coordination Protocol (DACP). The way this protocol works is shown in the following diagram:

So, assume we enabled DAC for our example configuration and we recover the servers in the primary datacenter with the network connection still down. Those servers are still under the assumption that the FSW is located in the primary datacenter so – according to knowledge of the original configuration – they have majority. When starting up, their DACP flag is set to 0. However, they can’t reach a DAG member with a DACP flag set to 1 nor can they contact all DAG members they know about. Therefore, the DAG members in the primary site will not mount any databases, not causing split brain syndrome nor divergence.

Note that DagOnly and Off are the only options for the DatacenterActivationMode parameter.

If you’ve configured the DAG for DAC mode, and LogLevel is sufficient, you can monitor the DAG startup process using the EventLog. The Active Manager holding quorum check status every 10 seconds. It is responsible for keeping track of the status of the other DAG members. When sufficient DAC members are registered online, it will promote itself to PAM (like in non-DAC mode), which functions as the “green light” for the other Active Managers.

The Active Manager on the other DAG members will periodically check if consensus has been reached:

Limitations
Unfortunately, it’s not an all good news show. DAC mode in Exchange 2010 RTM can only be enabled when using a DAG with 3 or more DAG members distributed over at least 2 Active Directory sites. This means DAC can’t be used in situations where you have 2 DAG members or when all DAG members are located in the same site. This makes sense for the following reasons:

When you try to enable DAC using a 2 DAG member configuration, you’ll encounter the following message:

When you try to enable DAC using a single site, the following error message will show up:

Note that this message will also show up if you didn’t define sites in Active Directory Sites and Services at all, so make sure you define them properly.

Additional reading
More information on Datacenter switchovers and the procedure to activate a second datacenter using DAGs in non-DAC as well as DAC mode can be read in this TechNet article. Make sure you compare the actions to perform for DAC and non-DAC setups and see that DAC makes life of the administrator much easier and the procedure less prone to error.