After being absent for over 10 years, this year the most anticipated conference for Exchange minded people took place in Orlando, Florida (US), the Microsoft Exchange Conference 2012 (MEC).

Despite not being able to attend MEC 2012, I’d like to summarize the news on Exchange 2013 from the event. Some of this information went public as part of the release of Exchange 2013 Preview, which was released in July (yes, almost 2 months ago – time flies). Some statements were new, like for example the expected release date of Exchange 2010 SP3, which is required for co-existence with Exchange 2013.

With all the social media nowadays, you can track most of the statements made at the event. Thanks to people like Jeff Guillet and Devin Ganger and people from our The UC Architects group, like  Dave Stork, Michael van Horenbeeck, Pat Richard, Serkan Varoglu and John A. Cook, who reported live from the sessions they were attending (hastag #iammec), the community was kept up to date with information as it unfolded. At each the end of the day, Tony Redmond gave a nice summary including comments on the event as a whole. 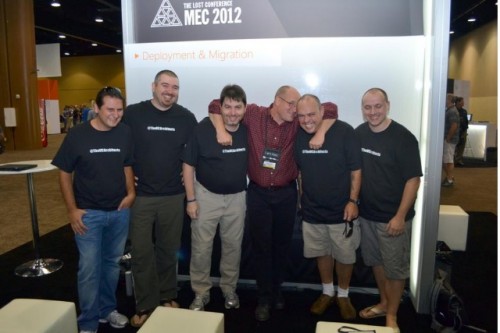 Picture shows some of people behind The UC Architects together
with Perry Clarke (GM Exchange), who you might recognize from
the Ask Perry videos. The picture is taken by Tony Redmond.

Ok, now on to the goodness.

Co-Existence
Exchange 2010 Service Pack 3 is expected to be released in the first half of 2013. Not only is it required for co-existence with Exchange 2013, it also supports Windows Server 2012 as Operating System platform. Note that SP3 will require a schema update.

Also, passive copies have around 50% reduction in IOPS, mainly due to the increased checkpoint depth (100MB) and less aggressive pre-reading of data to keep in line with the checkpoint depth (I’ll devote a separate article on this at a later date). This means when mixing active and passive copies on a Mailbox server, the passive copies play more nicely from a storage perspective. Also, because of these changes database fail-over times are down from 20 seconds in Exchange 2010 to about 10 seconds in Exchange 2013.

Databases
In Exchange 2013, multiple databases per storage volume allowed, which allows for active and passive copies on the same volume. Looking at the lower IOPS requirements of Exchange 2013 ESE’s engine and the 50% lower IOPS factor of passive copies, this allows for some serious consolidation on large volumes. The number of volume copies must match the number of databases per copy.

Mailboxes
Besides the recommendation to embrace 7,200 RPM disks for Exchange storage, large mailbox implementations are expected to take off (100GB+, including mailbox, archive and recoverable items) in an ongoing battle to get rid of PSTs and 3rd party solutions.

Due to database accounting changes in Exchange 2013, mailboxes may see a 30% increase in size when moved from Exchange 2010 to Exchange 2013. Make sure you adjust mailbox quota settings accordingly.

Client Access
CAS 2013 will proxy client traffic to Exchange 2010 using the CAS 2010 server’s FQDN, i.e. it won’t determine or use internalURL or InternalNLBBypassUrl. You can’t configure CAS-to-CAS proxying per site; it’s an all or nothing setting. At RTM, Exchange 2013 Client Access servers won’t contain support for SSL offloading.

Health Checking
Exchange 2013 will not only check the server’s health looking at the Exchange services, but it will also check the protocols.

Automatic Reseeding
Besides the ability to seed databases using multiple sources, which prevents the situation where multiple remote copies are seeded over WAN links from the active copy, Exchange 2013 contains a feature called Automatic Database Reseeding or just AutoReseed.

AutoReseed can be utilized to automatically reseed databases when required, e.g. after a storage failure. AutoReseed can even allocate and initialize spare disks to restore database redundancy. AutoReseed requires configuring three new properties, which are part of the DAG:

Site Resilience
Exchange 2013 will feature an automatic site (datacenter) fail-over using a witness server located in a 3rd well-connected site. This enables customers to automate the process of site switchovers, from primary to secondary site. This feature is optional.

This may confuse existing Exchange customers, who perhaps learned with Exchange 2007 a 3rd site for the cluster voter was not recommended, after which it shortly became an option with Exchange 2010. Then, after a while an adjusted recommendation was published not to use a 3rd site and now it’s option again,

Despite this, I think this certainly is a valuable feature. Normally, site outages and datacenter switchovers are stressful situations; if it’s preconfigured and automated, the less prone to error the switchover process is.

Exchange fellow and colleague Jaap Wesselius, who did
2 sessions on Load Balancing Exchange, was interviewed
by F5. Click the image to watch the interview.

Exchange Online
You can use Exchange 2003 with Exchange 2013 Online (when it becomes available) by utilizing an Exchange 2010 CAS server, just like today.

Unified Messaging
The Exchange 2013 UM role has a 100 concurrent calls limit. As you probably know, in Exchange 2013 Mailbox servers are used for UM as well. Because of that, this limit will have serious consequences when you’re designing an environment using several big servers; you might be forced to distribute the workload over more, lighter servers.

Exchange 2013 and ForeFront Treat Management Gateway
Exchange 2013 will work fine in conjunction with ForeFront TMG, except for maps feature when using TMG’s Forms-Based Authentication (FBA); the only thing you need to adjust is the logoff URL. Note that despite the ForeFront TMG 2010 End-of-Life statement from Microsoft last week, people like Greg Taylor (Program Manager Exchange) emphasized customers shouldn’t avoid using or opting for TMG while it is still available.

Emphasis was put on being able to control Public Folders and put that data in the same store is worth losing the multi-master functionality.

Exhibitor ENow Consulting held a contest
for collecting the most autographs.

Message Hygiene
Exchange 2013 will include tools to block messages in a certain character set. This is useful in scenarios where you don’t expect messages in one of the Chinese languages and you want to block (potential) spam written in one of those languages.

Message Routing
Exchange 2013 won’t use least-cost routing when routing messages, but it will use it to determine if Hub sites are defined. Exchange 2013 will honor Hub site definitions, but there are to be considered legacy.

An MBX server and CAS server listen for incoming messages on port 25 unless co-located; then the MBX server will listen on port 2525.

More background information on message routing in Exchange 2013 also in conjunction with Exchange 2010 is to be found here.

Virtualization
Many statements were made to de-emphasize virtualizing Exchange and only use if for testing purposes. When virtualizing, the same rules apply as for Exchange 2010.

Like with earlier versions of Exchange, the ESE engine will claim memory at startup using the amount of physical ram. Configuring Dynamic Memory is therefor not only pointless but also not recommended, like I stated in an earlier post on Exchange and Dynamic Memory.

It is also emphasized that putting VMDK files on VMWare NFS disks is not a supported scenario, so I assume this is often seen in the field despite not being supported from Microsoft.

Mobile
ActiveSync in Exchange 2013 will cause 65% less RPC communications over Exchange 2010.

Outlook Web Access
When using OWA 2013 in offline mode, the locally generated cache file isn’t secure; use of BitLocker is recommended. Single Sign-On in combination with OWA on Exchange 2013 redirection will be fixed post-RTM. Also, be advised that at RTM, OWA in Exchange 2013 won’t have support for Public Folders.

IAMMEC Portal
A portal for the Exchange community was announced, iammec.com. Here, people involved with Exchange can get information from within Microsoft or other sources. How this will differ from the Exchange related topics on TechNet forum is to be seen.

It is unknown if there will be a MEC in 2013; Microsoft’s director of PM for Exchange, Michael Atalla, said there will a MEC when “theres’s something  to talk about”. It is rumored that recordings of the 1st day of the conference will be made available at a later date, except for the interactive sessions.

PS: The icon accompanying this article is the Exchange 2013 logo.